Reversing the Deculturation of Fatherhood

Being freed from the “fetters” of fatherhood means that we neither know who we are nor where we are going. In order to recover fatherhood, there must first be a recovery of the fatherhood of God.

Pope John Paul II, in the course of his “Theology of the Body”, refers to the “Masters of Suspicion”, an expression he

borrows from Paul Ricoeur that applies to Sigmund Freud, Karl Marx, and Friedrich Nietzsche. For the Holy Father, the philosophies of this triumvirate typify what St. John the Evangelist describes in his Second Letter (15-16) as the “lust of the flesh”, “lust of the eyes”, and the “pride of life”. Freud wanted to free the sexual instinct from the restraints of the “superego”; Marx encouraged members of the proletariat to revolt so that they could satisfy their desires for material possessions; and Nietzsche proclaimed an ego too powerful to be held down by moral constraints.

The lust, avarice, and pride that these three atheistic revolutionaries espoused have not brought about personal fulfillment. On the contrary, they have led to a disintegration of personality. The fruits of lust, avarice, and pride are, respectively, bitter loneliness, spiritual dissatisfaction, and abject misery. John Paul explains that “Masters of Suspicion” (“maîtres du soupcon“) is a most telling phrase because it indicates that a heart which naturally expresses itself in the form of lust, avarice, or pride, cannot be trusted. The heart of man, as described by Freud, Marx, and Nietzsche, implodes upon itself and in so doing becomes an object of deep suspicion. The heart is at odds with itself and therefore cannot be trusted.

The vital element that is omitted in the thought of these three godless thinkers is a relationship with the Father. As St. John writes: “If anyone loves the world, the love of the Father is not in him; because all that is in the world is the lust of the flesh, and the lust of the eyes, and the pride of life; which is not from the Father, but from the world.”

The image comes to mind that the poet William Butler Yeats provides in The Second Coming: “The falcon cannot hear the falconer . . . anarchy is loosed upon the world.” Man in the modern world, following the “Masters of Suspicion”, has become so estranged from God that he can no longer hear the Father’s integrating message. Without the father, chaos reigns.

Freud, Marx, and Nietzsche, whose influence on the modern world is immense, were particularly vehement in their rejection to the Fatherhood aspect of God. They all believed and taught that the condition for human liberty is the death of God the Father.

For Freud, perhaps the most basic tenet of his psychoanalysis is that neurosis results when the severity of the superego is too great. He therefore sought to rid people of the Law and ultimately the Law Giver, that formed the superego. Freud saw himself as a new Moses (or an anti-Moses), whose destiny is to abolish the Fatherhood of God that was responsible for the oppression of the human psyche.

Marx was an avowed enemy of anything divine. “I hate all the gods,” he proclaimed. His Promethean temperament set him against what he believed to be a fictitious god that first mesmerized and then oppressed the masses. He viewed subservience to a Father figure as a deathblow to one’s own selfhood. No sacrifice for him could be too great in deposing god in the interest of liberating man. “I would much rather be bound to a rock”, he proudly asserted, “than be the docile valet of Zeus the Father.”

Nietzsche wrote his first essay on ethics when he was but thirteen years of age. In it, he imagined that he solved the problem of evil. “My solution to the problem”, he wrote, “was to give the honor to God, as is only just, and make him the father of evil.” “Why atheism nowadays? Nietzsche asked. “The father in God is thoroughly refuted.” “Love yourself through grace,” he advised, “then you are no longer in need of your God, and you can act the whole drama of Fall and Redemption to its end in yourself.”

The “Masters of Suspicion” turn the human heart against itself. Consequently, man is inflamed by lust (Freud), infected by materialism (Marx), and inflated by egoism (Nietzsche).

In his international bestseller, Crossing the Threshold of Hope, John Paul II avers that original sin is, above all, an attempt “to abolish fatherhood”. As a direct result of this attempt, the Holy Father goes on to explain, is the notion that God is not a loving father, and the impetus “to do battle against God”. If man does not view God as a loving father, he will view him as a tyrant or as an oppressor, and therefore will rebel against him as a slave would against the master who kept him enslaved.

Modern atheism is not the atheism of despair, or of fate, or of ignorance. It is, as Henri de Lubac has pointed out in The Drama of Atheist Humanism, “humanistic”. That is to say, a presumed benefit to mankind. But atheism, particularly as it has been promulgated through the “Masters of Suspicion”, is essentially fatherless. And fatherlessness inevitably leads to anarchy, both personally as well as socially.

David Blankenhorn’s important study, Fatherless America: Confronting Our Most Urgent Social Problem (1995), shows that fatherlessness is the most harmful trend of the current generation: the leading cause of the declining well-being of children; the engine driving our most urgent social problems, from crime to adolescent pregnancy to child sexual abuse to domestic violence against women. Despite the massive social problems created by fatherlessness, he informs us, a concerted effort is still underway to “deculture” paternity. American society is not content with the vilification of fatherhood; it must abolish it, thoroughly and completely.

In their article, “Deconstructing the Essential Father,” published in the June 1999 issue of American Psychologist, authors Louis B. Silverstein and Carl F. Auerbach argue that fathers are not essential to the well-being of children. In fact, they believe it is positively dangerous to think otherwise: “We see the argument that fathers are essential as an attempt to reinstate male dominance by restoring the dominance of the traditional nuclear family with its contrasting masculine and feminine gender roles.”

In order to recover fatherhood, there must first be a recovery of the fatherhood of God. St. John’s “theology of lust”, presented in his Second Letter, consititutes the basis for what was subsequently developed as the Seven Deadly Sins. The “pride of life” was divided into three categories (pride, anger, and envy), as was the “lust of the flesh” (lust, gluttony, and sloth). Together with the “lust of the eyes” (avarice or greed), they make up the time-honored Seven Deadly Sins.

St. Augustine and St. Thomas Aquinas spoke of that inordinate love of self that leads to a hatred of God. The Seven Deadly Sins can be fatal to fatherhood. In the present age, psychiatrist David Gutmann, author of Reclaimed Powers: Men and Women in Later Life (1994), has stated that matter in reverse. The “deculturation” of paternity, he writes, produces narcissism, a me-first egotism that is hostile not only to the common good, but also to even the most juvenile understanding of personal happiness. In any event, excessive self-love and rejection of the Fatherhood of God are co-existent.

The fatherhood of God conjoins authority with love. The Masters of Suspicion have told us that no such conjunction is possible, that all authority, by its very nature, is contrary to love. On the other hand, the Holy Father has told us that ethos and eros (law and love) are not only compatible with each other, but are essential to the integrity of the whole person. Ethos without eros (law without love) is identified with sin and thereby betrays the heart. The dignity and nobility of fatherhood lies in the ability to find a basis in the heart that is deeper than sin, one that unites love for others with an equally passionate concern for how they should live and where they are going. Fatherhood is neither lawless love nor loveless law. It is the unification in the person of affection and direction.

Being freed from the “fetters” of fatherhood means that we neither know who we are nor where we are going. Fatherhood gives us both our identity as well as our destiny.

Living a New Life in Christ as Catholic Men

Your Money or Your (Family) Life 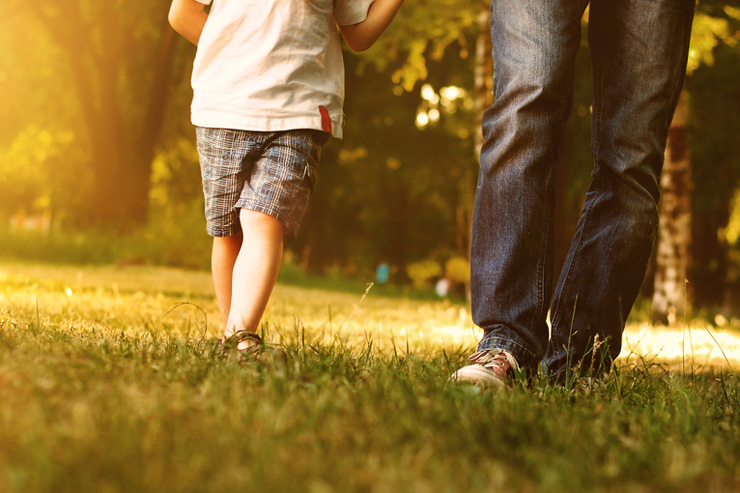 When Fathers Take Time To Teach Their Children

A Father’s Unity of Life