Justice has the nature of an equation: Borrowing ten dollars requires returning ten dollars. When justice is violated, punishment or restitution of some kind is required. Herein is the timeless significance of bringing the scales of justice back into balance. Injustice demands a counterbalancing repayment.

Clemency goes beyond justice, to some extent ignoring the need for precise balancing, and reduces the payment. For example, clemency may be used to reduce a sixty-day sentence to fifteen days.

Mercy goes beyond both justice and clemency to wipe away the need for punishment. It does not turn a blind eye to the offense committed, but it does pardon the offender.

In order to be in a position to appreciate the reasonableness of forgiveness—and the accompanying horror of condemnation—one must stand on a platform built on its foundational virtues. It is comparable to a father lifting up his child so that the lad can see over the heads of the people in front of him to see the parade.

The secular world has its penitentiaries, just as hockey has its penalty boxes and baseball scorecards have their error columns. The kind of forgiveness the world usually offers is of a bogus variety—that of forgiving yourself. This concept of self-forgiveness is, in part, the consequence of modern secular psychology that has inflated the importance of the individual as an individual. Popular self-help books such as How to Be Your Own Best Friend, Winning Through Intimidation, How to Get Divorced from Mom and Dad, and others, create the impression that the individual is an island unto himself.

In the absence of forgiveness—or the presence of unrepaired relationships—the field is wide open for the unchecked spread of deadly vices. This is the theme of Friedrich Dürrenmatt’s most enduring play, Der Besuch der alten Dame (The Visit of the Old Woman). In the play, first staged in 1956, Claire Zachanassian, now a very wealthy woman, returns to the town that unjustly condemned her and drove her out forty-five years earlier. Her unforgiving attitude hardens into hatred for all the townsfolk. Drawing on a huge amount of inheritance money, she exploits the greed of the people of Güllen, seduces them into murdering her principal defamer, and leaves town with the diabolical satisfaction that the collective guilt of the people will plague them for many years to come.

The Fundamental Paradox of Forgiveness 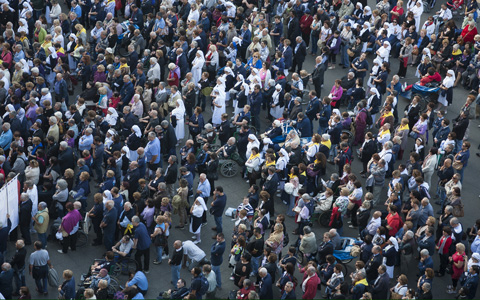 The Church is in “this” for the long haul…