They tell me she looks just like me.  I smile and nod and smile some more.  To be honest, I don’t consider it much of a compliment for her.

But then, when I sent some pictures to a grandmother who hadn’t seen her in far too long, I heard that she thinks my daughter looks, not like me, but like my husband.  You might expect me to be disappointed, but I think it’s great.

My older daughter is the spitting image of my husband’s family, though she has some of my expressions.  She has his dark eyes, his complexion, his height and stature.

My younger daughter doesn’t look much like her sister.  Instead of dark features, she’s light, with curls and an impish, ornery smile that I know all too well.  She sticks her tongue out when she’s concentrating and has a way of looking at Daddy that I think my own father would recognize.

Hearing that my children resemble my husband warms my heart.  My desire for my children is that they turn out like my husband.  It’s not that I think I’m such a bad person, but that I have such admiration and respect for him.  When I was wavering and unsure of myself, at what I think now was one of the lowest points in my life, he came along and quietly swept me away.  I discovered a treasure trove in the Catholic faith, thanks to his silent witness.

Who do you resemble?

I think this must be how Mary feels about me.  She sees me striving so hard to do my best, and maybe she smiles, as I do, when she sees how I resemble her Divine Spouse, the Holy Spirit.  Does she get a tear in her eye at the thought that I could be like Him?

I know she must be cheering for me.  As Queen of All Saints, she has a host of children who have grown up to be a lot like Jesus.  While none of us humans can achieve His perfection, the saints stand in a group in front of me, urging me to fight down the desire to see them as too holy to imitate.

So often, I’m guilty of giving up if I can’t reach perfection.  What’s the point, after all?  Is a thing worth doing if it can’t be done right?

“Yes!” the Queen of Saints whispers in my ear, as my head lies on my pillow, exhausted from a day of failed attempts.  “Keep failing, my child.  It’s the only way you can get close!”

Mary is an example of perfection, but she’s not an inaccessible icon, sitting on a remote throne far away.  As Queen of Saints, she opens her arms wide, embracing a group of fallen humans who keep trying.

If I keep listening to her and following her example, I just might find out that I’m starting to look a bit like her.  And, if I’m lucky, maybe I’ll start to resemble her Spouse too, which will lead me to looking more like her Son. 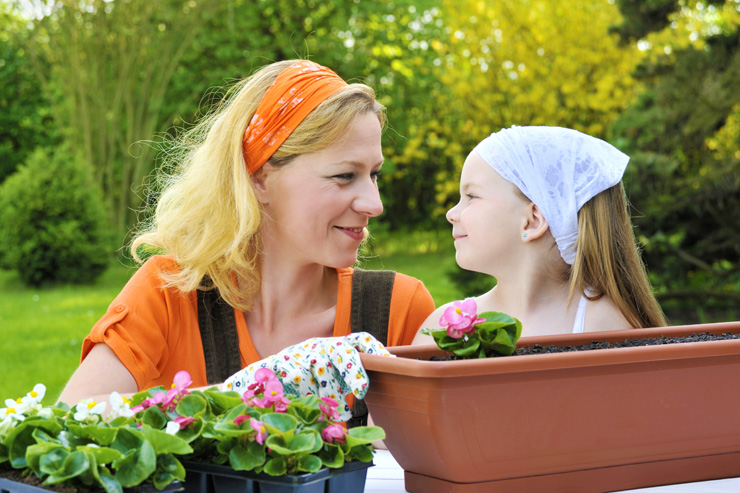 Dressing Mary as a Modern Mom