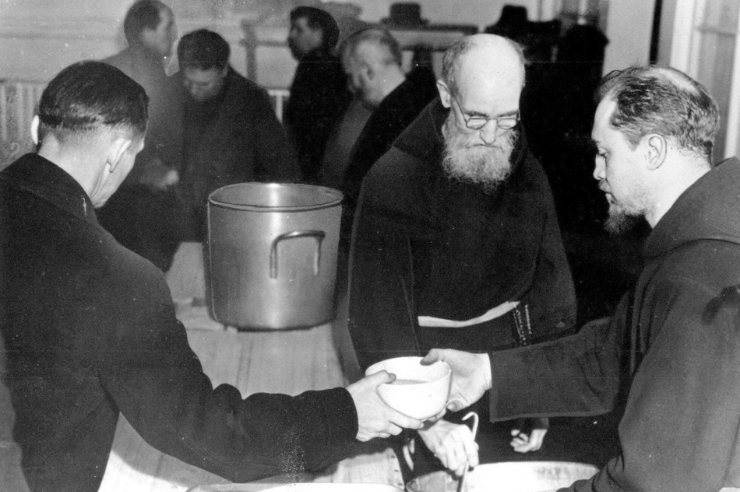 A couple of months ago when my lovely bride of nearly thirty-seven years told me she got an assignment to cover the Beatification Mass for Father Solanus Casey, I offered to drive her from our home in Bismarck, North Dakota to Detroit.  It would be an opportunity for my wife Patti to see her ninety-two-year-old Dad and other friends and family who live near where she grew up in Dearborn, Michigan.  So as you read this article today (11/16/2017) on Integrated Catholic Life, we are driving east the 1,152 miles from our house to Patti’s Dad’s house in Michigan.

In two more days on Saturday, November 18, 2017, we will be part of the largest Catholic event in Michigan since Pope John Paul II’s visit in 1987. Forty years after that Papal visit of the future Saint John Paul II, Father Solanus Casey will be beatified.   That Mass will take place in downtown Detroit’s Ford Field, the home of the NFL’s Detroit Lions, not far from where Father Solanus spent over twenty years. While nearly every Catholic in the world knows the story of  Saint John Paul II, few outside Michigan and New York know the remarkable story of Father Solanus Casey.

Father Solanus was born Bernard Francis Casey on November 25, 1870 on a farm near Oak Grove, Wisconsin along the Mississippi River. Barney was named after his father. Barney was the sixth child of ten boys and six girls. Father and mother were both Irish immigrant parents who left Ireland after the potato famine years. Father Solanus seated in his Capuchin habit with his family on his parents’ 50th anniversary in 1913.
(Courtesy of the Father Solanus Casey Guild)

His childhood was rich in love, steeped in Catholic tradition. The Casey children shared a love for sports, hunting, fishing, swimming, skiing and skating. The ten boys formed their own baseball team called “The Casey Nine.” Barney played catcher, usually without a glove.

Before he was even a teenager, Barney felt a stir in his heart, a calling.  At the age of twenty-six in 1896, he took up the brown habit and white cord of the Capuchins. Barney was given the new name of Friar Francis Solanus after his patron, St. Francis Solano, the Spanish missionary to Peru.  St. Francis was one of Barney’s patron saints.  His middle name Francis came from the sixteenth century Franciscan priest who loved the poor and ministered to slaves in South America.

Father Solanus’ superiors felt he was not adequately prepared in theology and doctrine, so they decided he would be ordained a “simplex priest” without faculties to hear confessions or preach doctrinal sermons. Father Solanus was devastated, but the seeds of humility were planted. On July 31, 1904, Father Solanus Casey celebrated his first solemn Mass at St. Joseph Parish in Appleton, Wisconsin. After his ordination in 1904, Father Solanus spent twenty years in New York, Harlem, and Yonkers. His first assignment at Sacred Heart in Yonkers, New York caused his pastor to question how a “simplex priest” might fit in. Solanus first served as sacristan, then director of the altar servers, then porter or “doorkeeper,” answering the bell at the monastery door. These were minor jobs for rookie friars, but Father Solanus took great pride in them.  It was at the monastery door, though, where Father Solanus became a much-loved and sought-after counselor. Eventually, visitors came specifically to see Father Solanus to receive his counsel and prayers. Sick people often sought his blessing and remarkable cures began to take place.

He was assigned to St. Bonaventure Monastery in Detroit where he worked for twenty-one years from 1924-1945.  In 1946, at the age of seventy-six, Father Solanus semi-retired at the St. Felix Friary in Huntington Indiana.  In 1956, Father returned to Detroit for medical treatments and died at St. John Hospital in Detroit on July 31, 1957.  He was declared Venerable by Pope John Paul II in 1995.

Everywhere he served, Father Solanus was known for his wonderful ministry of healing and compassion toward people of all faiths, Catholic, non-Catholic, non-Christians and even atheists. Solanus’ heart also went out to those who had given up the practice of their faith or had no affiliation with any church community. He saw each person as loved by God and called to share in God’s life.  His simplicity and humble nature bore fruits of miracles, healings, conversions and peace. It is in that spirit that 66,000 people will celebrate in Detroit at Father Solanus’ beatification Mass on Saturday November 18th.

Read more on our journey and the life of Father Solanus on Integrated Catholic Life tomorrow after we leave St. Paul, passing near where Father Solanus grew up in Wisconsin, south of Chicago along the southern shores of Lake Michigan to Dearborn.

The Audacity to Take it to the Streets