Twenty years ago today was one of the most remarkable days of my life. It occurred during a phone call with my mother. And I would challenge those who doubt that miracles happen to provide a more plausible explanation for the series of events I’m about to relate.

Everything began the day before, October 19, 1997, when St. John Paul II declared the Little Flower of Lisieux, St. Thérèse of the Child Jesus and the Holy Face, a doctor of the Church. I always have had a special love for her since I read her spiritual autobiography Story of a Soul at 20. To celebrate the centenary of her birth into eternal life a few weeks earlier, on September 30, I had gone to Lisieux with seminarian friends studying with me in Rome. But as memorable as that celebration was, for me it was only a prelude to her becoming by far the youngest ever to be given by the Church the only doctorate that eternally matters — this for a girl who never attended high school, not to mention university or graduate programs.

For that Mass I had extraordinary seats. A friend of mine was a Papal Chamberlain, one of those responsible for seating the diplomats, bishops and other VIPs close to the altar. He was a highly successful Canadian lawyer who had come to Rome in his 50s to study for the priesthood. Because it had been some time since he had taken notes in class, he cajoled me for a copy of the notes I was taking with the first laptop to grace the student desks of the University of St. Thomas. Knowing what he did at papal liturgies, I told him it would cost him: one day I would ask him for a special seat at a papal liturgy! He was happy to take the deal. Two years later, I came collecting.

He sat me in the second row, to the right facing the altar. During the liturgy, the Crucifix and the relics of St. Thérèse that had been brought to the Vatican were showered with red rose petals, a tangible reminder of the promise she made on her deathbed: “After my death, I will let fall a shower of roses. I will spend my heaven doing good upon earth.”

When the Mass was done and St. John Paul II had departed, the “Sagrato” or altar area cleared out quickly. I noticed that where the Crucifix and the relics had been were about a hundred rose petals. I decided to make a bold attempt to go collect some. I gathered a sizable handful where the Crucifix was and then another handful from those that had showered her relics. When I saw no one else coming, and fearing some might be wasted, I filled both cassock pockets. I returned to the Seminary happier and feeling luckier than a chocolate-loving kid returning home on Halloween.

Later that night, I started to share the red fragrant treasure with those I knew had devotions to the Little Flower, making envelopes for friends in Rome who were Carmelites, women and religious sisters named Thérèse, seminarians and priests who loved her. I then made cards to send them to similar categories of people in the States. I still had some left over and so I decided to send some to my mother. As far as I could recall, she had never mentioned St. Thérèse to me — her clear devotion of choice was and is Our Lady — but her mother’s middle name was Thérèse and I thought that, minimally, she would appreciate getting a card from her son.

About 9 pm that Sunday night I put the cards in the Vatican Post Office mail slot in St. Peter’s Square. I knew that at 9 am the following morning the mail would be collected, brought to Fiumicino Airport, flown to Switzerland — where the Vatican has an agreement to help with its international mail — and then put on a plane for the US. Normally mail from the Vatican to Lowell, Massachusetts, takes 7-10 days.

The following afternoon, about 5 pm — 11 am on the East Coast — my mother called me. She thanked me profusely for the card.

“The card with the rose petals from St. Thérèse,” she replied.

“What are you talking about?,” I retorted.

“You sent me a card with the Rose petals that touched St. Thérèse’s relics.”

I told her that that Mass happened just the day before and that even if the Concorde had been waiting in St. Peter’s Square at 9 am Rome time to fly the card directly to Lowell, it still probably wouldn’t have gotten there by that time. Dumbfounded, I asked her to read me what was written in the card; the words she said were those I had penned the night before.

“That’s a miracle!” I exclaimed, not able to get my mind around how that card had arrived faster than humanly possible. But my shock would soon grow.

“How did you know I was praying a novena to St. Thérèse?” my mother queried.

“I didn’t,” I answered, my spine beginning quickly to chill. “I didn’t even know you had a devotion to her. What day of the novena is it?”

“The ninth!” she blurted out. Overwhelmed, I didn’t say anything for quite some time.

“Well, Ma, that’s seems like a pretty obvious sign that whatever you were praying for will probably be granted. What was your intention?”

She said she was praying for a miracle for my great Aunt Gertrude, who was dying of cancer.

Filled with gratitude and tears, I confessed, “Well, we should have great hope that that she will receive some time of healing, one way or another.”

“Let me finish!” my mother insistently rejoined. She told me that earlier that day, before the mail had arrived, she had gotten a call from my Aunt asking her to come to see her at her doctor’s office. The doctor had come into the room looking strange and telling my Aunt that he needed to re-run various tests for confirmation. My Aunt thought he was about to return to tell her she would have days or weeks left. She didn’t want to receive the news alone. So my mother hustled over there to await the results with her. When the doctor returned, he told my Aunt … that there was no trace of cancer.

My mother was obviously overjoyed and divulged that she had been praying a novena to St. Thérèse to finish on the day of my Aunt’s doctor’s appointment, but, strangely, my mother added, she had been waiting for a rose to announce that her novena had been answered — as St. Thérèse is wont to send, one mysterious way or another — but none had come. She returned home grateful but bewildered. Then she picked up the mail. It was when she opened my card that she saw the rose petals and immediately called me.

That happened twenty years ago today, and my shock, awe and gratitude to God — and to the youngest doctor of the Church — haven’t waned.

This article originally appeared in The Anchor, the weekly newspaper of the Diocese of Fall River, Mass, on October 20, 2017 and appears here with permission of the author.

The New Year’s Resolution That Will Change Your Spiritual Life 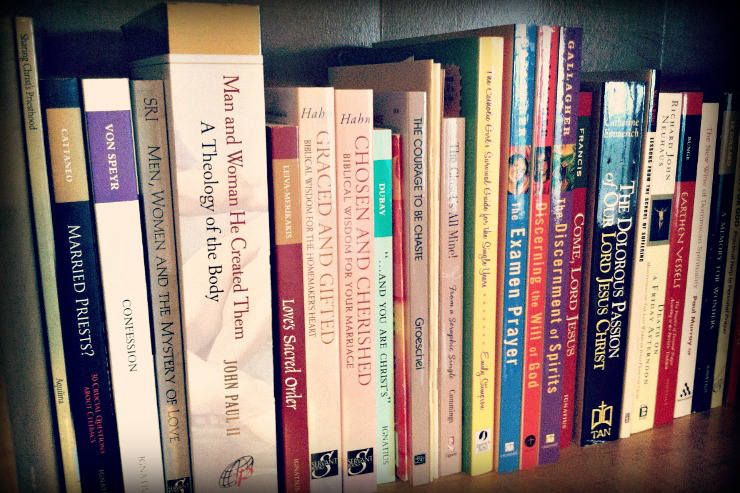 What the Church (and world) needs from you