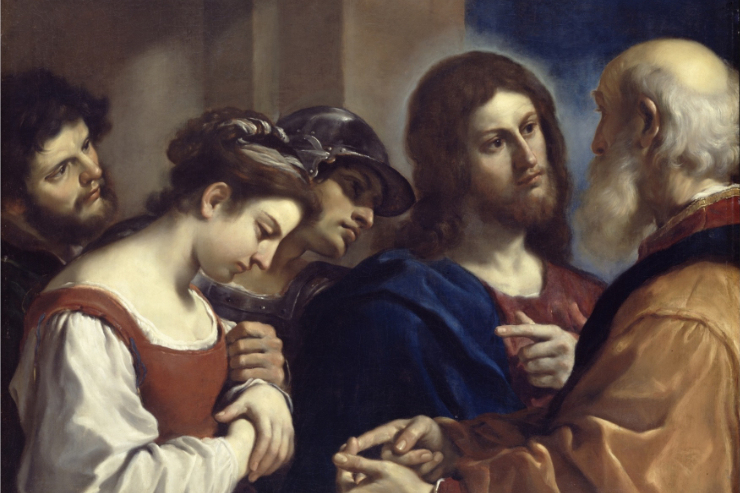 “Christ and the Woman Taken in Adultery” by Guercino (Public Domain)

I once heard someone say, “When a person has fallen from grace, don’t kick him down.  Help him up!”

It sounds so obvious, but we really do need to be reminded.  We see it all around us.  “Did you hear what she did???”  Shock and outrage are often our response to accounts we see on the internet, hear on the news, discus with gossips.  It’s all gossip, really.  And how do we respond?  “I’m shocked!”  “How terrible!”  “He should be locked up!”

Even when it is someone in our own circles or family, we want to believe we would never do likewise.  We’re better than that!  And it’s easier to continue believing so when the gap between us and them remains large.  So, we kick them down.  “You see, he’ll never learn.”

Don’t we like to see prisoners treated harshly?  Don’t we root for the bully to get some of his own back?  Don’t we love it when the movie bad guy not only gets caught, but is annihilated by the hero?

What is the matter with us?!?

But I think most of us also love—and I mean really love—when the hero shows mercy beyond the desserts of the villain.  It makes the hero better.  Occasionally it even makes the villain better as well. Isn’t that part of what makes us love The Lord of the Rings, the recently released Wonder Woman film, dare I mention the Gospels??  Talk about stooping down to lift others up! And Our Lord uttered from the cross, “Father, forgive them, for they know not what they do.”

I cringe whenever I see the meme that says, “Everything happens for a reason . . . sometimes the reason is that you’re stupid and make bad decisions.”  Okay, I cringe after I laugh, but I cringe.  It might be true, but it hardly gives us superiority!  If we’re smarter and able to make better decisions than another person, that actually puts us in a position to help them.  What does it say about a person who criticizes someone for not doing what they aren’t able to do?

I suggest we challenge ourselves to rise above the petty feeling of superiority we get standing atop a heap of failures, by reaching down to give them a hand up.  Are we afraid they will fail again?  They will—just like we do, too.  Seven times seventy!  Are we afraid they will succeed—and then we’ll look worse than we did in comparison to them?  Well, that’s just silly!  Would we think a teacher is smarter if all his students failed?  On the contrary.

Can you imagine a father bringing his four-year-old son out to play basketball and sneering at the little fellow because he couldn’t get the ball into the basket?  Most of us would not think him a very good father.  We wouldn’t make fun of the little fellow as a failure for being unable to reach the hoop as well as his tall father.  Rather, we would admire the sort of father who lifts his little boy up to the hoop so he can learn to play basketball and have fun with his daddy.

Isn’t it the same when we hear of a heroic person who lowers herself to help even strangers?  Mother Teresa (St. Teresa of Calcutta) is still one of the most universally recognized and admired figures for giving her whole life to just that work: serving the poorest of the poor.  And her religious order still attracts many young women to this life of dramatic mercy.

You may not be called to such a community, but there are many opportunities all around us to extend mercy to those who have fallen from grace.  Often, that means giving tangible help, a kind word, good advice.  Always it means praying for them.  But first, it means seeing who we are to them—and who we are to those who have shown us mercy.  Foremost among these is God, of course.  If we have received God’s mercy, it will be harder on us if we fail to extend mercy to our neighbor.  Remember the parable Jesus told about the servant whose debt was forgiven, who then had his own debtor thrown into prison until he paid the debt (I always wonder just how they’re supposed to do it from there anyway).  When the master learned of that servant’s harsh treatment of the other, he again held him accountable for the original debt, withdrawing his mercy.  We invite this response when we pray the Our Father: “forgive us our trespasses as we forgive those who trespass against us.”

In her short story “The Sculptor’s Funeral,” Willa Cather poignantly illustrates the life crushing pettiness of those who revel in the failure of others.  The nothing men of a nothing town gathered at a funeral to malign and criticize the every failure of the young man brought back in his coffin—as they did everyone who left the town to better himself.  The crushing speech bringing to light their snivelly evil was given by a man they had previously brought down to their level and was now a drunk, corrupt lawyer who did their dirty legal wangling.  He knew from experience and observation that it was they themselves who planted the seeds of failure in the young men they enjoyed criticizing when the failure bloomed.  The story leaves the reader with a creepy feeling of disgust toward those men who kicked down those who had not only fallen from grace, but their falls were the result of being tripped by those very men.

It is a good exercise to think a moment before uttering our shock, our distain, our judgement on those who are pathetic, who are sinful, who have fallen from grace.  Hold back our accusation, our ridicule, our kick.  Won’t it make us all not only feel better, but to be better to lift them up instead?  If we need inspiration to do so, we need only to look up and see the hand of divine grace reaching into the depths to raise us up again.