St. Paul, in his letter to the Ephesians, explains how we should serve each other: “Wives, be submissive to your husbands, as is fitting in the Lord. The husband is the head of the wife just in so far as he is to her what Christ is to the Church. He gave his life for her. And so just as the Church submits to Christ so should wives to their husbands in all things” (Eph 5:22-24).

Even among our fellow Christians, when you speak about submission, they think you are joking. “Sorry? What do you mean? I take it you are being ironic?” Not even pastors dare say such things these days for fear that we women will stone them to death!

Yet I have seen that for those who try out this advice, it is a path to salvation. It’s not paradise—we hope for that in the life to come—but it’s a kind of salvation here and now, in this life. In other words, it brings us peace; a full and satisfying married life.

In my book, Marry Him and Be Submissive: Real Advice from a Real Woman About Marriage, Love, Kids, Work, Play & Everything Else, I reveal how true marital happiness and holiness is found in submission.

5 Misconceptions About St. Paul’s Letter to the Ephesians

Here I’ll share five common misconceptions about what it means for wives to be submissive…bear with me, you may be surprised!

1. A wife holds up her family

In Italian the translation for submissive is sotto messo, which means “placed under” so as to be the support of your family.  A wife is the foundation of her family, sustaining everyone, her husband and her children, by adapting, accepting, suggesting, and sweetly engaging. It is he (or in this case she) who is below, who holds up the world, not the person who places himself above others. Only a wife is able to do this, because in the family she is the only adult woman, meaning the only one who is flexible, gentle, solid, strong, patient, and far-sighted.

2. St. Paul was not saying women are inferior

When St. Paul exhorts women to be “below,” he doesn’t suggest for a moment that they are inferior. The opposite is true. It was Christianity that, for the first time in the history of the world, defended women’s role and valued their dignity. The most wonderful creature ever to live was a woman, for starters! And let’s not forget that Jesus scandalized his contemporaries in how he honored and interacted with women. It was to women that he first showed himself after the resurrection.

3. Equality is not sameness

Men and women are very different, which has nothing to do with equal opportunities. We are not the same, and not recognizing this is a cause of certain suffering, as indeed happens every time we deny the truth. Equality is not sameness. It is about giving equal dignity to two identities that could not be more different.

For a woman, her genius lies in welcoming. Feminism has denied this and, in doing so, has cheated us. I know many women who are sad, angry, disappointed, resentful, and jealous. They are divided in their inner selves. Too many women don’t understand the secret of being welcoming and then of submission, of obedience seen as an act of generosity.

4. Submission is a gift

The submission St. Paul talks about is a gift, freely given like every gift. If it weren’t, it would be a burden instead. It’s a gift of self that is spontaneous and made out of love. I renounce my egoism for your sake. And if we have to speak in terms of greatness and littleness, of strength and weakness, of power, then let’s remember those words: “He who wishes to be first among you must become your servant.” This is the measure of a person’s greatness.

5. Fathers must reclaim their role

It’s up to fathers to reclaim their rightful role, willingly and with determination. Authority comes from recognition of credibility in the one issuing the order. And for once, the responsibility here lies not with the woman but with her companion. The fathers of today have to roll up their sleeves and find a way to show authority. His first role must be to guide the family, to point out the path, to provide a direction of travel, and to monitor it every day, setting limits and offering reassurance. Costanza Miriano is a wife and mother of four children ranging from 7 to 14 years old. She works as a journalist for Rai (Italian public television), is a freelance writer on education and relationships, and has worked with the Pontifical Council for the Laity.

She has written four books, including Marry Him and Be Submissive and Marry Her and Die for Her (forthcoming from TAN Books) which have sold around 70,000 copies in Italy and have been translated into Spanish, French, Portuguese, Polish Slovenian, and now English. 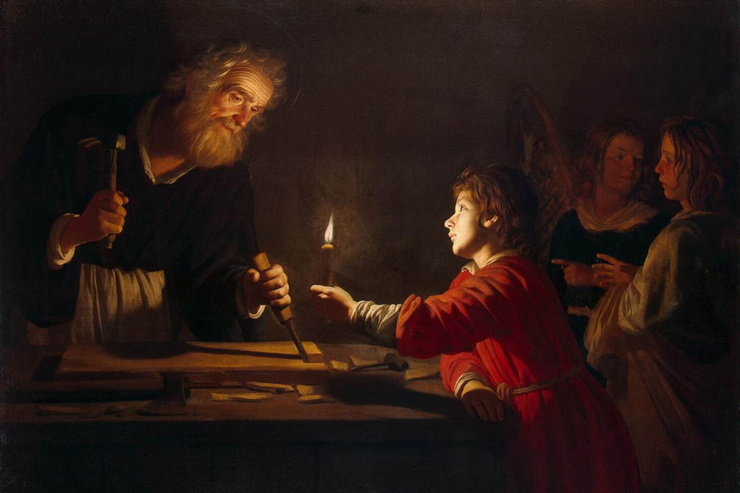 A Gift of Faith

Sleepless and long past midnight,