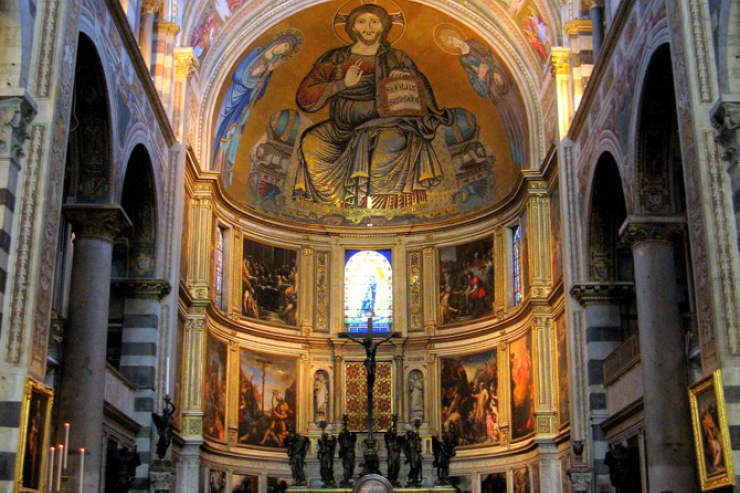 Travel Journal Day 6 — There’s more to Pisa than a tower that leans.

Try to think of something else in Pisa besides the Leaning Tower.  It’s hard I know.  For sure the Tower is one of the most remarkable architectural structures from medieval Europe.  What the average person may not realize is the Pisa Tower is just one of the four buildings that make up the complex called the “Campo dei Miracoli,” which means “Field of Miracles.”  The tower’s construction began in 1173 and continued for about two hundred years due to a series of wars in the area between the various Italian city-states like Venice and Florence, all vying for trade supremacy.

Before we got to Pisa, we started our day in Roma with Mass at St. Peter’s. Then a few us decided to climb the nearly six hundred steps to reach the top of St. Peter’s dome and we took in the view.  It was not for the faint of heart.  Some who attempted the climb this day decided to turn around (okay it was Patti, who said I could name her) before even reaching the halfway point.  Four of us did make it to the top and looked down on St. Peter’s Square and into the Vatican gardens where Pope Benedict now resides.  The views were breathtaking on our last morning in Roma.

In the afternoon we caught the train from Roma to Pisa.  We then quickly made our way to the Field of Miracles and snapped obligatory pictures as we got close to the Tower.  The one snapshot that tourists loved to take was to pretend they were holding the leaning tower in place with their outstretched hands.  We of course joined in on the fun and snapped a few ourselves.

We reached the base of the tower and went inside and climbed the two hundred ninety-seven well-worn, marble steps. The circular staircase wound its way on the inside to the top of the Tower.  When we reached the marble summit, nearly eight stories high, we immediately noticed the seventeen feet or ten degrees off vertical the tower is famous for.   We wobbled for a moment or two as we got our bearings.  Looking out over Pisa was every bit as beautiful as our view from earlier that morning atop St. Peter’s in Rome.

My favorite building here is not the Leaning Tower, but the massive Cathedral devoted to St. Mary of the Assumption.  Work on the Cathedral began in 1063 and was financed with the plunder from the war against the Muslims in Sicily when the Pisan Republic was one of the world’s great maritime powers.  The massive, white and black marble columns that support the inside of the Cathedral were taken from the Mosques in Sicily by the raiding Pisan warriors.  The marble columns were then placed in small ships to be sailed back to Pisa to use in the Cathedral’s construction.  How the Pisans strapped those massive marble columns to their relatively small oar and sail-powered vessels, and got them back to Pisa, is a bit of a mystery.  Or maybe that is why they call it the Field of Miracles.

Tomorrow morning we will attend Mass at the Cathedral and then board the train again, this time to Turin for three, special days there to see the Shroud of Turin and then conclude our family novena in Italy at Milan. 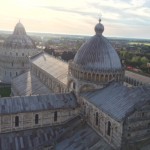 Cathedral of the Assumption taken from top of the Leaning Tower of Pisa, Photography by Mark Armstrong 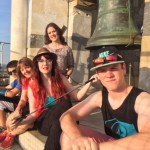 Bell on the Tower of Pisa, Photography by Mark Armstrong 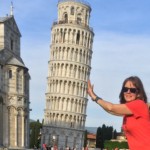 Patti trying her best to support the tower… 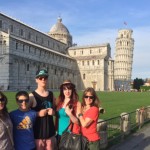 Cathedral of the Assumption and Tower of Pisa, Photography by Mark Armstrong 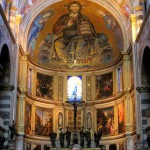 Inside the Cathedral of the Assumption in Pisa, Photography by Mark Armstrong 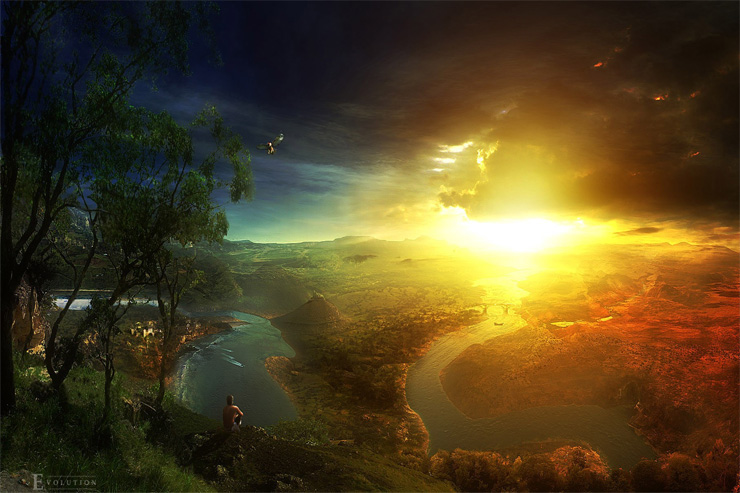