When my fourteen-year-old daughter Teresa and I left Turin five years ago, I never expected to see the Shroud of Turin again in my lifetime.  God had other plans for our family.  After leaving Pisa this afternoon, we boarded a train and traveled first along the Italian coast and then crossed the mountain passes into Turin.  Eight Armstrongs quickly checked into our bed and breakfast and made our way to the Cathedral of St. John the Baptist for the final viewing of the evening of the Shroud.  The Shroud has been here since 1578 and this is only the fourteenth time since 1898 that the public has been invited to come and see it.

My interest in the Shroud dates back to 1981 when Patti and I were first married.  Back then, Dr. John Jackson, part of a team that examined the Shroud in 1978, gave a presentation from the findings[3] of the Shroud of Turin Research Project to the public in Portland, Oregon.

After that talk, I began to read and study all the information about the Shroud that I could find in those pre-internet days.  In the 1990s, as a radio talk show host,  I would often invite authors with new books about the Shroud to be guests for my shows.  I would learn even more through these books and interviews about what most believe to be the actual burial cloth of Christ.  After my visit here in during the 2010 exhibition, I began to write articles for ICL[4] and other websites and give presentations about the Shroud.

Pope Francis plans to visit here in June to venerate the Shroud, as Pope Benedict XVI did in 2010.  For the record, the Catholic Church has neither formally endorsed nor rejected the authenticity of the Shroud.  In 1958, Pope Pius XII approved of the image in association with the devotion to the Holy Face of Jesus[5]. Saint John Paul II called the Shroud, “a mirror of the Gospel” and “an image that everyone can see and no-one can explain.”

It is a fact that no Catholic would ever be required to believe the Shroud is the actual burial cloth of Christ.  And it is also true that Catholics will not be the only ones among the more than two million people who will see the Shroud over the three months it is on display this year.  The Shroud is respected by most Christians faiths, including Baptists, Lutherans, Methodists, Orthodox, Pentecostals and non-Christians too.  There are of course many others who come to Turin who are just curious and some, ironically, profess no belief in God.  All will spend sometimes hours in line as they come here for a three-minute viewing.

Scientific publications have presented both evidence in favor of authenticity and possible methods of forgery about the Shroud.  However, the fact remains that even with today’s modern scientific methods, no one has been able to explain all the chemical, biological, nuclear, photographic and medical evidence or has anyone been able to reproduce an exact replica.

In my humble opinion, the Shroud is an enigma and was best described by one of the faithful in the sixth century as, “the image not made by human hands.”  More on the science of the Shroud and some of the other incredible sights of Turin tomorrow. 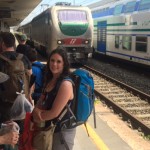 [6]
From Pisa to Turin by Rail, Photography by Mark Armstrong 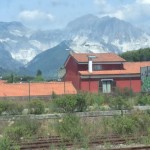 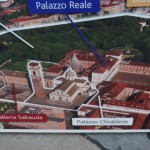 [8]
Overhead of Cathedral and Museum complex, Photography by Mark Armstrong 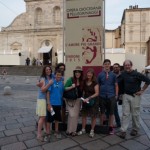 [9]
In Fromt of St. John the Baptist Cathedral in Turin, Photography by Mark Armstrong 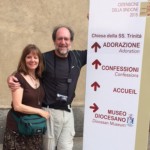 [10]
Patti and Mark Armstrong in Turin 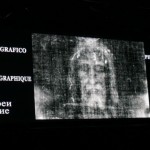 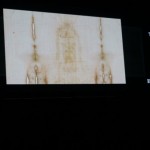 [12]
The Holy Face on Shroud, Photography by Mark Armstrong