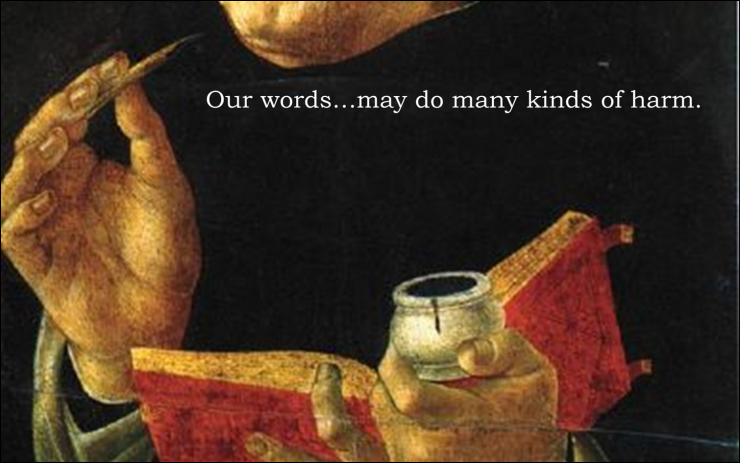 As an editor and educator, I likewise counsel other writers to follow the same rule. Write about issues and topics. Do not criticize people publicly. If you must name a person for the sake of attribution, deal dispassionately with the issue not the person. If you can make your point without naming names, do so.

There is a term for this ‘calling-out-people-by-name-and-publicly-criticizing-them.’ In the writing of St. Thomas Aquinas, the treatise on virtue in the Summa Theologiæ, the section on justice, this act is called “reviling.” The question is found in the Second Part of the Second Part, Question 72.

To put it in context, as one must do when reading Aquinas, reviling is considered within a section on vices and “involuntary commutations” (i.e. something imposed). Injury of a neighbor, for example, can be committed (imposed) against the neighbor’s will by deed, such as murder, bodily injury, and theft or robbery. Injury can also be imposed by word. Verbal injuries can be inflicted in judicial proceedings by the judge, the accuser, the defendant, the witnesses, or by the defending attorney, and these all relate to the practice of justice in a society. In formal proceedings, it is often necessary to name names so that justice may be served.

But verbal injury can also be inflicted “extrajudicially.” If someone who has no authority over another person self-appoints himself or herself the judge of another as if the other is his or her subject, then whatever upbraiding is delivered occurs outside any formal authoritative hierarchy. Among the extrajudicial verbal injuries inflicted on people against their will, reviling is at the top of the list, and the other vices follow—backbiting, tale-bearing, derision, and cursing.

To “revile” is to verbally dishonor someone, to rail against a person, to talk abusively, to make abusive or angry criticisms, to shame another. St. Aquinas called reviling via the written word, “…when a man publishes something against another’s honor, thus bringing it to the knowledge of the latter and of other men.” In other words, it is when someone publicly makes angry criticisms against another rather than seeking to resolve a difference in private. Backbiting is to revile a person to a third party in secret. Derision is reviling with jest or ridicule. Cursing is to command or desire evil on another.

Is reviling a mortal sin?

St. Aquinas answers in the affirmative, quoting the Gospel of Matthew.

Words can injure people. When a self-appointed judge reviles another person publicly, it not only can hurt the person being reviled, it can do harm to that person’s friends and family as well. If a person dishonors another with the intent of dishonoring, it is, according to St. Aquinas, a mortal sin “no less than theft or robbery, since a man loves his honor no less than his possessions.” (Trust me, the same goes for women.)

There can be an exception when reviling is not sinful, but it is exceedingly narrow and not a guarantee against sin. If the intent is not to dishonor but to correct, then it may sometimes be a venial sin or no sin at all, so long as the intent in the mind of the reviler remains not to dishonor but only to correct. Thus, when speaking publicly about another person, one must use caution. If there is any question about the intent in the mind of the speaker or writer who decides to publicly play the role of judge against another person, then that role-player must use words with discretion and moderation, lest he or she sin. If there is any intent whatsoever to dishonor the other person, the reviler sins. And sometimes even with the best of intent, the reviler sins anyway by injuring the other person. St. Aquinas warns:

Nevertheless there is need of discretion in such matters, and one should use such words with moderation, because the railing might be so grave that being uttered inconsiderately it might dishonor the person against whom it is uttered. On such a case a man might commit a mortal sin, even though he did not intend to dishonor the other man: just as were a man incautiously to injure grievously another by striking him in fun, he would not be without blame.

In this age of the internet, some people would argue that correcting others publicly even through shame and dishonor is necessary. They would argue that there is nothing wrong with mockery for the sake of humor. But it depends on the one being mocked. If he or she thinks the mockery is either humorous or helpful, and goes along in such good humor and subjectivity, then it is not a sin, for the wittiness of the reviler brings joy and guidance. If, on the other hand, the reviler does not stop inflicting pain on the object of his or her “witty mockery, so long as he [or she] makes others laugh, this is sinful,” and a line has been crossed.

The bottom line is: People are not objects. People are people, imperfect sinners like everyone else. We owe others the benefit of the doubt. We owe it to others not to bring dishonor.

Should we suffer reviling?

What if you are the one being reviled? St. Aquinas said, “Just as we need patience in things done against us, so do we need it in those said against us.” We are bound to be prepared to submit to be reviled, if that is the surest way to bring peace. However, St. Aquinas also said we are not always bound to suffer the injury of reviling, reminding us of the words of our Lord when he received a blow. “Why strikest thou Me?” (John 18:23).

Sometimes it is right to take a stand against reviling for two reasons. First, we may “check” the reviler for his or her own good, to hopefully stop the sinful action consistent with Proverbs 26:5, “Answer a fool according to his folly, lest he imagine himself to be wise.” The second reason is for the good of others who are mislead into sin by the reviler. Here St. Aquinas quoted Gregory:

Those who are so placed that their life should be an example to others, ought, if possible, to silence their detractors, lest their preaching be not heard by those who could have heard it, and they continue their evil conduct through contempt of a good life.

Even in checking the reviler, however, the one originally reviled must check himself or herself before acting in his or her defense. If the response is done to dishonor the one who dishonors, there is a danger of lust for one’s own honor and a danger of acting with a lack of charity.

Why do people revile?

So I am convinced it is not worth the fleeting release of anger, possibly masquerading as justice, however seemingly righteous in the moment, to publicly correct someone else. Reviling can so easily be a mortal sin. Injury, once done, cannot be undone but only healed. If we strive not to injure in the first place, we’ll do more to bring justice to society than we could ever bring about by publicly railing against our peers.

Four Ways to Keep Christmas With You 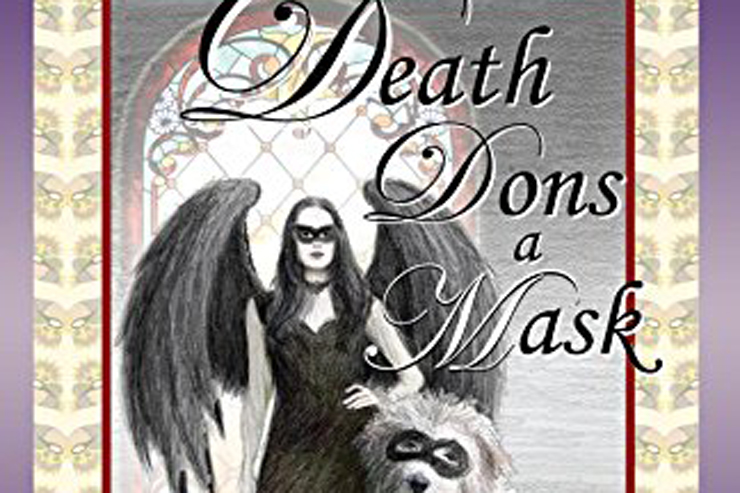 Death Dons a Mask: A Murder Mystery Worth the Fun