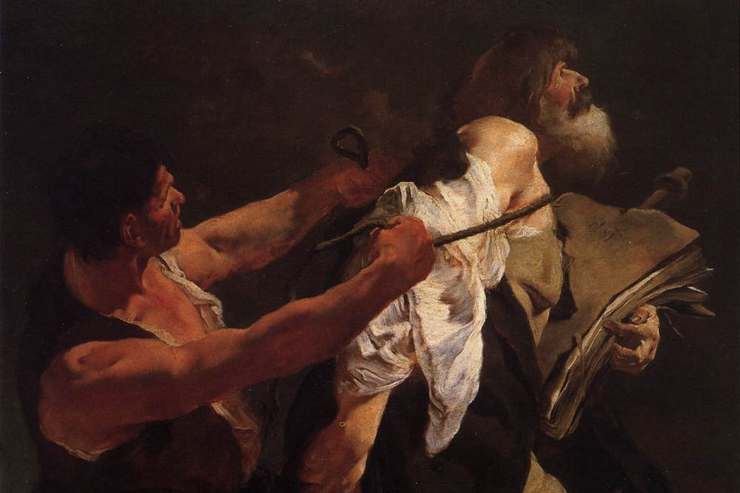 “The Martyrdom of St. James”
by Giovanni Battista Piazzetta

There is no quantifiable way to discuss the tragic loss in France incurred by Islamic violence; seventeen people murdered in cold blood by irrational fiat. Appropriate international mourning followed the devastating events. Sorrow is the fitting response as Christ teaches us, “blessed are those who mourn for they shall be comforted.”  And indeed we shall be comforted if we properly mourn the sins of the world and our own sins as well. While the world has had no problem mourning the sins of the terrorists and the concomitant loss, we have come up short on mourning our own sins, and thereby forfeit the comfort that is available to us by the gifts of the Holy Spirit.

At a glance, it may seem appropriate to show support to the victims of violence in France with the slogan “Je Suis Charlie.” This increasingly popular cliché denotes a certain solidarity. Though a properly ordered solidarity is much to be desired, in the case of Carlie Hebdo, this is not possible by morally ordered souls.

Though we ought to pray for the lost souls and families who lost loved ones in France, we ought also to take stock of why solidarity with Charlie Hebdo is imprudent. The truth is that Charlie Hebdo sees fit to put indecent, incendiary, and violent images on public display. And while they may have the legal right to do so, it is most certainly not morally ordered.

These dark times are difficult to decipher partially because moral and intellectual considerations have been subsumed by material considerations; thus reducing the moral and legal considerations to the positive legal aspect alone. Vital ideas like justice, freedom, and morality have been badly deformed by reduction and misuse. Particular distortion has been applied to notions of free speech and what that ought to look like. Morally ordered rules for governing free speech are rooted in ancient notions of virtue and have wound their way through the ages. Outside of the unceasing proclamations of Holy Mother Church, properly ordered speech in the public square may have made its final legitimate appearance in the United States Constitution.  What the Founding Fathers intended by “free speech” and what is meant by “free speech” today spans an unbridgeable gap.

There is much talk about the Constitution and how that living and breathing document ought to guide public life. Unfortunately, as we witness the decay of our social fabric as the last remnants of the Christian virtue are expunged from the public square, the guidance available to us by way of the Constitution becomes increasingly obscured. While no one begrudges the First Amendment’s just protection of religion and speech, it is doubtful that modern interpretations demonstrate fidelity to the Founding Fathers’ intent when they said “Congress shall make no law…. abridging the freedom of speech, or of the press.”

In the days of the signing, there was the implicit and common sense understanding that “freedom” of speech meant the liberty to speak and print the truth without interference from interests that might prefer to illicitly keep such truth hidden from the public. As an artifact of justice, the First Amendment denoted an understanding of the common good that assumed that free speech was ordered to the propagation of truth. This is not the case today. The legal right to free speech has jettisoned the moral duty to speak truthfully with regard to the common good.

The truth about language is that it is intended to be ordered to the good, the true and beautiful.

Freedom in today’s parlance is akin to license. It is assumed that freedom of speech means that anyone can say whatever they want to whomever they want regardless of content or form and without hindrance or reprisal. This truncated form of “freedom” of speech ignores the common decency assumed and possessed by our forefathers and aggressively opposes Christian truth on properly ordered speech. Instead, modern society invites and protects the wrong kind of speech. Unfortunately, so distorted has our understanding become that we now protect the vilest filthy speech and actually punish and constrict virtuous speech.

This consideration of public speech ordered to the political virtues only faintly echoes the command of Christ to “be perfect as my father is perfect.” For as St. James reminds us in the beginning of Chapter 3, “if any one makes no mistakes in what he says he is a perfect man.” Speech ordered to the Truth of the Logos is key to our efforts to become perfect. The truth about language is that it is intended to be ordered to the good, the true and beautiful. Speech, by nature is intended to covey truth as an act of service to the other. Truth in speech and in service to the common good is a matter of properly understood justice in the good society. Christ would remind us that freedom of speech is freedom from disordered speech, not the license to say whatever we want.

It is not the case in the world today that freedom of speech is understood as Christ would have us understand it, nor is it as it was intended by the Founding Fathers. The misuse of speech to gain advantage, or to offend is advanced by the dishonest protection of a false notion of freedom of speech. The unnatural propagation and protection of disordered speech while punishing virtuous speech has catastrophic results. Certainly it is not Charlie Hebdo’s fault that terrorists acted as they did, but will we deny that the provocation normalized by the moral void may have had some part in this heartbreaking calamity?

We cannot be sympathetic to the offenses the people at Charlie Hebdo feel justified in publishing. And while nothing justifies the murderous rampage taken up by the terrorists, Charlie Hebdo and their ilk have taken part in creating the moral void into which Muslim terrorists can move, inhabit and grow without fear of hindrance or reprisal. It is no small irony that France, guided by leftist ideology like multiculturalism, has been suffering the natural consequences its willful decline. We make similar mistakes in the United States with our state sponsored multiculturalism and protection of filthy public speech and the castigation of virtuous speech especially championed by the universities. The moral void here is approaching the dimensions of the moral voids in Europe and the results will be equally as devastating.

Nothing in the world justifies wanton murder committed by the terrorists at Charlie Hebdo. This must not be mistaken for a “blame the victim” assertion, but a consideration of the whole issue, not only the wrongs committed by terrorists, but the responsibility for the breakdown of our society to the point that these types of tragedies are occurring more frequently. In the good society fortified by virtue, these tragedies are much less likely to occur.

In the spirit of Catholic Truth and in understanding Christ’s teachings, we must mourn our own sins as we mourn the sins of the world. We must also condemn ourselves for allowing moral law to be obscured by conventional law. We must recognize that we have contributed to the moral void into which ideological groups may move and further degrade our culture and society either by our silence, or active participation. By protecting false freedoms to express moral degradation and punishing virtuous speech, we all but guarantee that our neighbors will suffer at the hands of terrorists who are allowed to thrive in a morally weakened culture such as ours. We are not Charlie. We must not allow ourselves to become Charlie. Let us mourn our sins as well in this tragedy and begin to fortify ourselves against further tragedy by putting on the mind of Christ, not the mind of the world. Let us put on the armor of Christ and protect ourselves by the shield of the moral law, not the armor of conventional law. Our eternal disposition depends upon it. 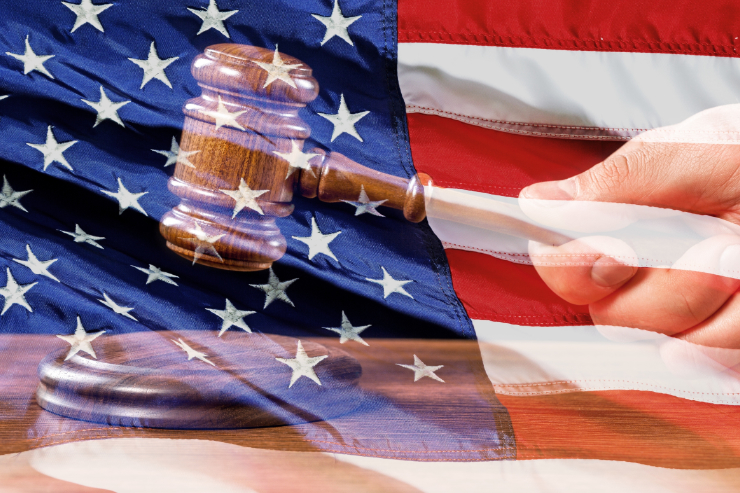