Flannery O’Connor and the Hardest Lesson of All 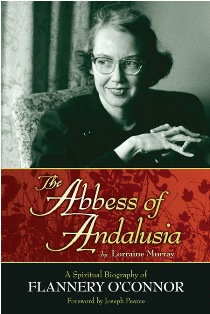 It came on suddenly like so many physical maladies do. One day I noticed numbness in my leg, and it didn’t go away for quite a while. The doctors said the problem was a pinched nerve in my back.

What to do? Stop sitting at the computer for long periods at a stretch was one piece of advice.

Habits are hard to change, especially for a writer who spends hours a day pounding the keyboard, but I did my best. I even tried writing while standing up, although that meant getting tired more easily.

Then I remembered my favorite writer, Flannery O’Connor, who has been very much on my mind as the anniversary of her death was yesterday, August 3rd.  I know that she quietly made many adjustments to her life when she was diagnosed with lupus at age 25.

And I have to marvel at how she accepted this particular trial with such grace and courage.

She was living with friends in Connecticut when the illness took hold. She returned to Andalusia Farm in Milledgeville, Ga., where she lived the rest of her life with her faithful and loving mother, Regina.

O’Connor was hard at work on her first novel when the symptoms started appearing, but she had to preserve her strength, so she could only sit at her manual typewriter for two hours each morning. That was a big sacrifice, yet she was grateful for the time she could devote to her writing.

In fact, she wrote to friends that she could take it all as a blessing, because when you have limited time to do something, you don’t squander it. She saw her ability to write as a calling, and she recognized her talent to create characters and plots as a God-given gift.

As for the illness, she knew it was the cross.

Lupus is the Latin name for “wolf,” and the disease stalks its victims mercilessly. Painful inflammation, rashes, swelling and fatigue are all part of the agonizing agenda.

The medications prescribed had their own crippling side effects, and by the time O’Connor was 30, she was on crutches. Still, she kept her sense of humor throughout it all, calling them her “aluminum legs.”

What was her secret? How did she get through it all?

It was her Catholic faith that sustained her. She attended Mass with her mother at Sacred Heart Church, said daily prayers and rejoiced in God’s blessings, which included the many noisy peafowl she raised at Andalusia.

Even the birds drew her closer to God, for at one point she told a Jesuit friend that in medieval times the peacock symbolized the Transfiguration of Jesus.

In a letter written to another friend on New Year’s Day in 1955, O’Connor emphasized that she didn’t see life as a tragedy, but rather as the will of God. She was careful not to grieve over her illness because grief at times can be self-pity “in sheep’s clothing.”

But how do you do this? It takes grace, she emphasized.

And for those downed by an injury, whether it’s a sprained back or a broken leg, and for those struggling with an illness, whether it’s cancer, diabetes or multiple sclerosis, the question might arise: Where can I get this grace?

As a Catholic well versed in “The Baltimore Catechism,” O’Connor knew that grace comes from frequent reception of penance and Holy Communion. And even if we feel nothing at all emotionally when we receive these sacraments, grace is still flowing, silently and mysteriously, into our souls.

Grace is also freely given by God in the ordinary, day-to-day moments of our lives, perhaps coming as a flash of recognition or a sudden understanding.

I confess that I have a long way to go when it comes to accepting suffering, but it does help to have role models to show us the way. There were times when O’Connor admitted that her illness caused her both physical and mental agony.

“I have never been anywhere but sick,” she noted, adding that this was a lonely place to be. “It’s always a place where there’s no company, where no one can follow.”

Still, there was another secret about suffering that helped O’Connor endure – and it is particularly Catholic in nature.

She knew the importance of offering up suffering to God as a prayer to help others – and in this way, giving it meaning. She also helped her friends by ministering to them through her letters, often serving as a spiritual director through the mail.

I wrote one piece of her advice on a white board on my study wall: “You will have found Christ when you are concerned with other people’s sufferings and not your own.”

It is the hardest lesson of all – and I’m not there yet – but it gives me hope to know that this grace-filled and gracious lady is pointing the way.

Lorraine is the author of a biography about Flannery O’Connor titled “The Abbess of Andalusia” (St. Benedict Press). The book explores O’Connor’s Catholic journey in depth, including her daily prayers, favorite saints, her journey to Lourdes, and her love for the birds and beasts at Andalusia.

Women’s “Progress” in the Eye of the Beholder

Reflections of a Mom New to the World of Mothering Boys