I’m sitting at home sick on a Saturday night. On one hand it’s a nice break, but on the other hand I’m sitting here contemplating my newfound free time and my to-do list. From the mundane achievable: must clean ALL the things; to the more ambitious: must learn French; to the more … lofty shall we say: I’m not doing enough to fight the culture of death and defend the faith!

I’ve had several conversations lately about this longing to DO something. It’s starting to be a regular Lenten theme.

This theme hits home especially when I’m outside Planned Parenthood and I see the women filing in one after another and I see the news out of Brussels that a successor of the apostles has been hit in the face four times with pies because he’s pro-life and speaks the truth about homosexuality.   It hits home when I see him smile with dignity through the whole episode and when I hear of Christians attacked and martyred in the Middle East.  It hits home when I read negative, angry comments about the Church from some of my family, college and high school friends.

I feel like the world is spinning faster and faster and my heart is a wind-up toy soldier ready to be put on the ground and GO DO SOMETHING ALREADY, but that big, invisible hand hasn’t put me on the ground yet. He just keeps winding and winding.

Maybe I’m not seeing the obvious task in front of me. Sometimes I wonder if maybe it’s just the simple fact that I’m being lazy.

Some friends and I went to see ‘Of Gods and Men’ last weekend. While I don’t recommend seeing the late showing, I was so struck by their daily lives of peace and duty. Days of quiet routine that made up the majority of their lives and the majority of the actions for which they’ll be held accountable.

The vocation of those monks, the most heroic part of their lives, was the quiet everyday fidelity and routine that prepared their hearts for their heroic ends. God was winding them up, every day, until they held the necessary tension to run the race through.

In confirmation we are all made soldiers for Christ. I don’t think we will ever lack opportunities to defend the Faith, but I know that growth lies in recognizing the little everyday opportunities. And if our hearts are wound up and longing for something more, maybe that’s the way He wants them, waiting and longing and grateful for the time to train under the direction of that sweetest of drill sergeants – the Blessed Mother – with her armor (the Scapular) and arms (the Rosary).

God winds up his army of soldiers and we must wait on His perfect timing to put us down and deploy us for our tasks. 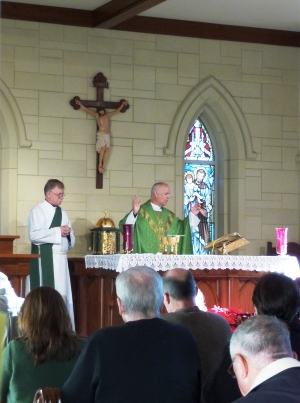 Making Daily Mass a Part of Your Schedule

Pickin’ Up and Movin’ On: How Faith Makes Change Easier