It’s that time again. The Christmas lights and decorations are adorning the grocery stores and coffee shops, and the radio stations are playing holiday music round-the-clock. The frenzied shopping kicked off early this year—beginning even before the dreaded Black Friday, with some stores creeping into family time on Thanksgiving in order to seize the avid shoppers with the most attractive deals that you “just can’t get anywhere else” (except, of course, at all of the other stores who are offering those not-so-one-of-a-kind deals).

If you don’t think it is hard to create and live an Advent culture in the midst of a commercialized holiday season, you aren’t hitting that counter-cultural stride hard enough yet.

The root of the word culture is “cult.” Today, most of us think of the word “cult” by its staunchly negative connotation, and in one sense of its definition, it is negative, when it refers to false or unorthodox beliefs. But cult also refers to, more basically, a particular set of beliefs or system of worship, a way of life embodied by an institutional group giving itself to a certain object of devotion. When the Advent season rolls around, we see two primary and opposing cults: the Christian Advent cult and the postmodern secular cult.

One cult worships the God made man. One worships the god of materialism. One believes in self-sacrifice in preparation for the coming of a King. One believes in self-embellishment in preparation for the coming of even more mass consumption and consumerism. One welcomes Christ; the other welcomes increased spending. One sings “O come, O Come Emmanuel;” the other, “Here Comes Santa Claus.”

As Christians, it is our duty to make our cult look altogether different from the secular cult this Advent season. But sometimes we get so caught up in the buying and eating, the busyness and distractions of the big department stores and holiday markdowns that we forget that we are fundamentally different from those who are celebrating the Happy Holidays of purchasing and baking, but not the Merry Christmas of the coming of the Messiah, the Christ who gives meaning to our Christmases—and to our whole lives.

It’s easy to overlook the fact that Advent is a lot like Lent. All the holiday joy, bells, lights, singing, and hustle-bustle around us often makes it hard to focus on prayerful preparation for the greater feast that awaits us at the end of a penitential period, which Advent is. In an Advent culture, the Christian is called to do some spiritual cleanup in his or her life, which often involves increased fasting and almsgiving. Imagine that! Eating less and putting material goods in their place during the weeks leading up to Christmas…the Advent cult is counter-cultural! All of these practices are meant to contain the Christian’s joy in anticipation for the excitement that comes on that special Christmas day, when we celebrate the greatest gift ever given to us—a gift that came wrapped in swaddling clothes and attracting little attention, not ornamented with shiny ribbons and advertised for on all the cable TV channels.

Don’t get me wrong. As Christians, we are meant to be in the world, which allows us to celebrate the Advent season by adopting some of the best secular traditions, which really isn’t “adopting” so much as it is taking back the celebrations that rightfully belonged to Christians in the first place before they were stripped of their spiritual dimension, giving them far less intrinsic significance.

So how can we create and live an Advent culture?

When you are buying your Christmas gifts, don’t forget the poor. Jesus has a special place in His heart for those who serve the poor; after all, Jesus himself was born into poverty. Perhaps you can even get your children to pool their change and donate some of their own money during the Advent season…it’s a good habit to start forming early.

This Advent, do those things which advance you on your journey toward that Star shining above the humble manger where our Blessed Mother will give birth to our Messiah, who will grow up, preach and heal, suffer, die, and rise to bring you the enduring gift of everlasting life.

Pope John Paul II once said, “The Word who found a dwelling in Mary’s womb comes to knock on the heart of every person with singular intensity this Christmas.”

Will you be ready when He knocks? 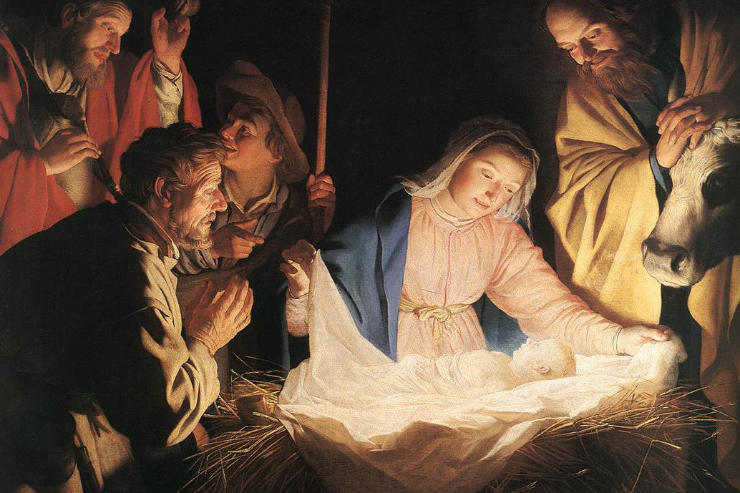 Jesus is The Good Shepherd